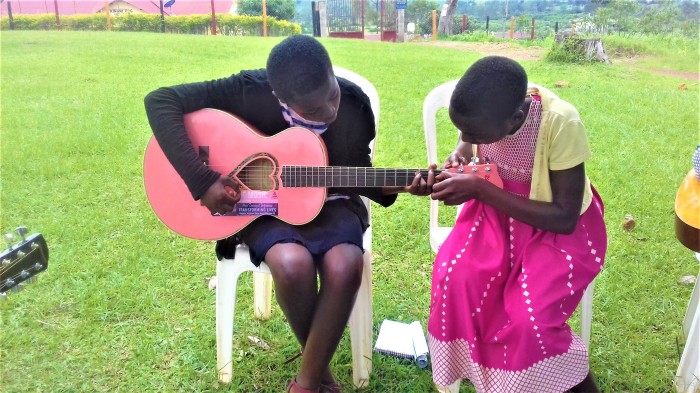 Kinoni CDC is one of the compassion centers in Mbarara where children are supported by Compassion international. Children are supported in very many fields such as education, medical care and other basic needs like food, clothing etc…Other skills are taught to children to live by in future such as weaving, tailoring, music, and farming.

Living Music Foundation partners with Kinoni CDC to extend performing music skills to their children. It was important for the center to buy some of the instruments to help the children learn as well as practice after the lessons . The instruments available are keyboard, guitars, drums and brass band instruments (trumpets, trombone, tuba etc…)

The project director and the management of Kinoni CDC wrote to Living Music Foundation to share the transformative performing music skills with the children by carrying out a one month everyday music instrument lessons.

LMF TEAM FOR THIS PROJECT

Our team arrived at the center and carried more guitars from the LMF office to support the ones at the center.

On the first day, the team inspected the available instruments and helped in cleaning them while generally teaching the children on how to keep and maintain clean instruments.

The next day students were given opportunities to choose the instruments of their choice and were subjected to tests to establish who will remain in a particular class for the next month. In every class, instruments were shared. For example, in the drum class, chairs were used to learn the beats and snare skills.

More pictures of the training in other days

The Vessels band was hired to perform at a function in Lyantonde by a local businessman who had discovered them while in Mbarara. Part of the band’s purpose is to speak about the Living Music Foundation during the performances.

Before Babrah’s performance, she introduced herself and talked about how music transformed her life, later asking the audience to embrace and encourage their children to learn music skills.

The Director of St. Paul’s Kindergarten and Primary School was in the audience; she was excited by the performance and interested in the role of LMF, so she invited LMF to her school.

St. Paul’s Kindergarten and Primary School is both a day and boarding school of all religious sects, but it is largely a Catholic school. The Director is a current member of Parliament for the area.

The school was planning to have a Parents’ Day at the end of the year. As is normal, the children are supposed to make presentations in poetry, music, dance, and drama. However, the teachers were unable to provide presentation material for the kids.

After seeing and learning about LMF, the Director’s prayers were answered. She asked the LMF to compose some music and help train the children so they would be able to perform on time. Time was short (only one week) but it got done!

Disan composed the songs. Patience and Babrah went to the school to train pupils. The director provided all the meals, transport, and accommodation for the LMF team.

Both Babra and Patience spent three days at the school helping pupils learn new songs. The rest of the LMF team (instrumentalists) joined Patience and Babrah to add instrument backing to the songs.

Living Music Foundation’s work was considered complete after having kids present their new songs to attendees on Parents’ Day. The Foundation concentrated on the music training and there were other activities that kids learned for presentation. The band helped by playing instruments as the kids sang and danced during their presentations.

Parents were happy and asking that their kids be trained always, as quoted from one of the speeches made.

The director of the school officially declared a partnership with LMF in music training and was approved by the parents present.

She paid all the costs incurred by the LMF team and paid them in full.

The parents promised to support the director of the school in buying musical instruments so their children could easily learn at school.

It was a day well spent. It was great to see the joy of the director, parents, and the children all together.

Child Development Centers (CDCs) are projects run by compassionate international volunteers in partnership with churches in Uganda to support the neediest of needy children in different communities. The support is usually in basic necessities—education, meals at home, and clothing, among others.

At the invitation of the Project Director, Living Music Foundation went to meet and talk to kids at the Kinoni Child Development Center about how music can help transform lives. She saw it as a good opportunity; these kids are in similar situations to most of the past LMF staff members who have also been transformed through music.

Once in a while, the kids gather at the Center for meals, medical checks, and to receive support through books, clothes, and many other services.

The project usually sets up Center days where kids come together and participate in several activities such as agriculture, music, sports, and many others!

Living Music Foundation and the Children

The Director of LMF, Disan Kato, took time to speak to the children and encouraged them to be good to those supporting and teaching them. He used examples of the team he went with—Jean, Babrah, and Patience. They later taught the kids some songs, sang with them, and performed for them.

Performances of LMF and the Children

The day was dedicated to music and the kids were given the opportunity to show their talents in music. They were split into several performing groups.

The center leadership and management promised to buy musical instruments to help the kids learn and train at the Center.

LMF accepted Kinoni CDC as one of its community centers to offer music lessons to in the near future.